“This is good news for New Brunswick taxpayers,” said Transportation and Infrastructure Minister Claude Williams. “We are pleased to see this property generate revenue for the province, while the port authority will benefit from this asset for operations and its strategic location near the port entrance and Route 1.”

The provincial government took over ownership of the property in March 2011 as a result of assuming responsibility for the Saint John Harbour Bridge. In November 2012, the port authority expressed interest in acquiring the property.

The Department of Transportation and Infrastructure and Port Saint John have also signed a memorandum of understanding allowing the province to continue using the garages at the site until April 2014 to store winter maintenance equipment for plowing, salting and sanding the bridge.

“Acquiring the Saint John Harbour Bridge building is critical as we look to continue to grow business at the port,” said Jim Quinn, president and chief executive officer of Port Saint John. “Our ability to facilitate intermodal trade in an efficient and seamless manner is essential for our customers and stakeholders. This access point is also integral to handling over-sized cargoes such as pre-fabricated modules. We appreciate the ongoing commitment of the province in helping to increase traffic at the port and in turn strengthening the long-term economic future of the province.” 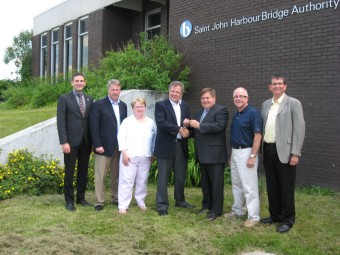