Office of the Premier
Energy and Mines

SAINT JOHN (GNB) – Premier David Alward said he is encouraged by an announcement today that TransCanada Corp. will hold a binding open season to obtain firm commitments from interested parties for a pipeline to transport crude oil from Western Canada to eastern Canadian markets.

"This is an important and encouraging milestone in the project," Alward said. "This project is potentially as important to Canada’s economic future as the railway was to its past. If we proceed, this project will strengthen our national and provincial economies and create jobs and economic growth today and for generations to come.”

Alward was joined by Fisheries and Oceans Minister Keith Ashfield at an announcement on the open season in Saint John.

The premier and Energy and Mines Minister Craig Leonard have held a number of meetings with Alberta Premier Alison Redford, senior officials in that province and Quebec Premier Pauline Marois to discuss the project.

The largest refinery in Canada, owned and operated by Irving Oil Ltd. in Saint John, can process 300,000 barrels of oil per day. But the premier noted the benefits of a new pipeline would extend beyond the Saint John region.

"There will be huge benefits, both direct and spin-offs, generated by this important project, including new, high-paying jobs and investment in every region of our province," Alward said.  "We understand the importance of this pipeline to creating jobs here. That is because New Brunswickers in every community in this province likely have a family member or good friend who is working in the oil and gas industry somewhere in Canada or the around the world."

He noted a new pipeline would alleviate Canada's dependence on foreign oil and increase the value of Canada's crude oil through shipping to world markets from the deep-water port of Saint John.

Leonard said the announcement showed that New Brunswick's work on the file and the support from many factions for the project is positive and that momentum must keep it moving forward.

"This is a complex project, but it is moving forward in a very positive way,” he said. “We are pleased that TransCanada has issued the open season in such a short period of time, and we will continue to work hard with our provincial and federal colleagues, as well as with industry, to make sure that the pipeline, which is so important to Canada and New Brunswick, comes to fruition." 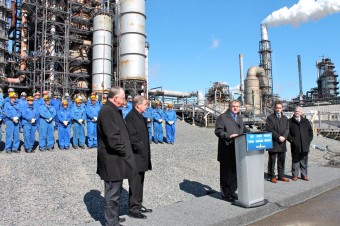