FREDERICTON (GNB) – The provincial government today tabled its 2013-14 budget, which makes strategic investments to strengthen the economy while addressing the provincial deficit with spending efficiencies and revenue initiatives.

"We are committed to correcting the province's structural deficit, which was created by poor management decisions in the past and worsened by the sluggish global economy," said Finance Minister Blaine Higgs. "While we need to take action on our declining revenues, we will also continue to manage taxpayers' dollars smarter and strengthen the economy today so that we can have a brighter future."

For 2013-14, the province is projecting a total deficit of $478.7 million. Excluding an unusual one-time pension expense of $110 million, an operational deficit of $368.7 million is projected. Even with the new measures in this budget, revenues are expected to increase by only 1.8 per cent in 2013-14 over 2012-13 third-quarter estimates to $7.994 billion. At the same time, expense pressures continued to increase over the past year. The province will address this shortfall by finding more spending efficiencies and bringing in new revenue.

This budget includes more than $230 million in spending-reduction initiatives across departments that are designed to offset inflationary pressures, allow for important new investments to position New Brunswick for a brighter future, and keep departmental spending virtually flat. Excluding the one-time pension cost, total expenses in 2013-14 are increasing by just one per cent over 2012-13 third-quarter mainly due to new investments, compared to the 4.4 per cent average annual expense growth over the previous nine years.

Reviews are underway in the departments of Health, Education and Early Childhood Development, Social Development, and Transportation and Infrastructure to identify efficiencies in service delivery.

"New Brunswickers who are being asked to contribute a little more in this budget need to be assured that we are committed to spending their tax dollars prudently," said Higgs, "Various efficiency measures have been rolled out across all departmental budgets to offset inflationary and service demand pressures and to allow for select new investments."

Savings are allowing for a select number of new investments totalling $70 million to be made in 2013-14 including:

●    $16 million in 2013-14 as part of a five-year, $80-million investment in innovation in order to jump start the economy;
●    the establishment of the new Energy Institute;
●    increases for a number of poverty-reduction initiatives including social assistance rate increases and improvements;
●    additional funding for special care homes, specialized care beds, and community residences and funding for the nursing home renovation and replacement plan;
●    the continued roll-out of the diabetes and mental health strategies; and
●    increased funding for early childhood development.

Given the current fiscal situation, further tax measures will be introduced to balance revenues and spending for a more sustainable budget. Personal and corporate income tax rate reductions introduced in previous years and which were never offset by new tax measures have created a large fiscal hole in the province's budget. These measures will therefore be rolled back to move toward restoring balance between expenditures and revenues.

Effective July 1, 2013, personal income tax rates will be returned to the rates that applied in 2006. While these rates are higher than those that are currently in place, the 2006 personal income tax rates are significantly lower than the rates that were in effect for 2007 and 2008. Reverting to the 2006 rates will mean the largest percentage increases for people in the top two income brackets making $77,900 to $126,662 and over.

New Brunswick's personal income taxes will remain lower than those in the other Maritime provinces and Quebec.

Effective July 1, 2013, the general corporate income tax rate will also be increased from 10 per cent to 12 per cent to ensure businesses also contribute to addressing the province's fiscal challenges.

New Brunswick will continue to have the lowest general corporate income tax rate in Atlantic Canada.

"Returning to the 2006 personal income tax rates and increasing corporate tax rates will help us to address the deficit while allowing for needed growth in the economy," said Higgs. "New Brunswick has a bright future. We are making management decisions today that will guide us through this economic downturn and, as we have done in previous times of recession, emerge stronger."

The 2013-14 budget is a reflection of the public's input and assistance. The provincial government received ideas through a revamped Taxpayers FIRST website on how to raise revenues and deliver public services more efficiently and effectively.

In 2013-14 the province will bring forward changes to make the government more accountable including:

●    Modernizing and clarifying the authority of the auditor general. The auditor general has an important independent role to play in holding government accountable, and increased focus on value-for-money audits is one of many areas for exploration.
●    Identifying and introducing a process to increase transparency and accountability in election commitments and ensure New Brunswickers are aware of the cost of election promises.
●    Improving government's risk-management practices of its loans and grants to businesses and reducing the risks of providing financial assistance to industry on a file-by-file basis.

●    Continue with the three-year plan to save $86 million by reducing the size of the public service through attrition and replacing only critical positions. The size of the public service was decreased by 637 in 2012-13.
●    Phase-out the retirement allowance for public servants, which currently costs the province about $52 million per year.
●    Institute an Attendance Management program for a 20 per cent reduction in sick-leave usage by March 31, 2015, resulting in savings of about $20 million.

Efficiencies from corporate, departmental and other program initiatives have reduced originally projected spending levels. The government will find the following efficiencies:

●    Reviewing the usage and cost effectiveness of all government vehicles, including executive vehicles, with the goal of reducing expenses by 10 per cent.
●    Putting the government airplane up for sale.
●    Absorbing growth in health care without compromising clinical services.
●    Capping Medicare billings at $425 million for the next two years and reviewing all of the financial incentives related to the recruitment and retention of physicians.
●    Reducing the price of generic drugs to 25 per cent of brand price effective June 1, and the dispensing fees paid to pharmacies will be adjusted to specify frequency of dispensing timelines for various pharmaceuticals for a saving of $7 million.
●    Working with the regional health authorities to explore management opportunities and introduce service efficiencies in non-clinical areas such as food and housekeeping services inside New Brunswick's hospitals. FacilicorpNB will be looking for similar savings opportunities in the area of hospital-based laundries.
●    Continuing the implementation of the Department of Natural Resources program improvement efforts.
●    No increase in funding to public universities, the New Brunswick Community College and the Collège communautaire du Nouveau-Brunswick with the expectation that they continue to seek operational efficiencies, and that any tuition increases will be capped at $150.

The rates will be as follows:

For example, for a single individual with taxable income of $40,000, this tax increase represents a modest increase of about $6 on a biweekly basis in New Brunswick personal income taxes in 2014.

For a one-earner family of two with taxable income of $80,000, this represents an increase of approximately $47 on a biweekly basis in New Brunswick personal income taxes in 2014. 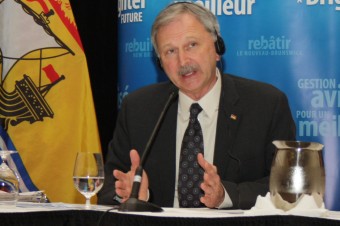