"We will soon be celebrating the ribbon-cutting for this major infrastructure project, which will enhance highway safety, international trade and travel between New Brunswick and the United States," said Transportation and Infrastructure Minister Claude Williams. "The project is being completed on budget and nearly one year ahead of schedule thanks to the dedication and teamwork from staff at the department and our partner, Dexter Developer General Partnership Ltd."

These sentiments were shared by Harry Varjabedian, project director, Dexter Construction Co. Ltd.: "Dexter Construction has taken a great deal of pride in this project from the beginning, and this was shared by the entire team and the province, from employees to management to suppliers."

The project comprises two contracts with the provincial government: a design/build contract and an operation, maintenance and rehabilitation contract. Dexter Construction Ltd. was responsible for the design/build portion of the work, while Transfield Dexter Gateway Services Ltd. is responsible for the operation, maintenance and rehabilitation until 2040.

Until construction wraps up later this month, motorists will see work continuing on some sections of the highway. The project was jointly funded by the federal and provincial governments. 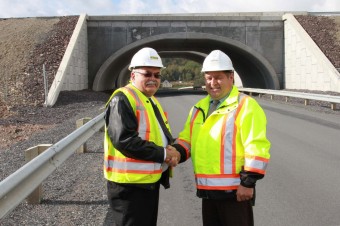