Provincial government reduces deficit by half and invests in priorities

FREDERICTON (GNB) – The provincial government tabled its 2012-13 budget today with plans to further reduce the deficit by more than half.

The deficit will be reduced to $183 million compared to the $448-million deficit projected for 2011-12. This will be done without raising the harmonized sales tax, income or gasoline taxes, and without introducing highway tolls.

"This budget represents an important step forward in the efforts of New Brunswickers to rebuild our province," said Finance Minister Blaine Higgs. "By governing smarter, we can continue to do more with taxpayers' dollars and better focus on the needs of the people."

Spending is projected at $8.196 billion. Savings and other efficiencies from corporate, departmental and other program initiatives identified through the government renewal process are expected to reduce projected spending by about $226 million in 2012-13. These include:

Higgs noted that government renewal would continue to find savings.

"Government renewal is not a one-year process; it is a never-ending road,” he said. “It is about believing in our employees to bring about change to the culture of government. This will lead to a greater focus on core services and accountability through performance measures."

Initiatives from the review of operations that form the basis for the 2012-13 budget include:

●    finding corporate opportunities to drive savings and reduce the size of government;
●    implementing more efficient practices;
●    aligning government priorities with accountability and performance management; and
●    realigning government to focus on core services.
"Along with our efforts to reduce expenses as a means of returning to balanced budgets, we are simultaneously moving forward with strategic investments to enhance New Brunswickers' quality of life and fulfil our commitments," said Higgs.

The provincial government will invest about $105 million in 2012-13 to implement legislative and government commitments, including:

Revenue is expected to increase 5.2 per cent from 2011-12 revised estimates, to $8.013 billion. This estimate includes extraordinary capital revenue relating to the federal government contribution to the Route One Gateway Project, which has been applied directly to the deficit.

Measures across government are expected to increase revenues by $100 million in 2012-13.

"We continue to see challenges in our debt and in the fact that our revenue is not enough to pay for the public services we are providing, but we have tabled a plan to meet our commitment of returning to balanced budgets by 2014-15," said Higgs.

Higgs said the public's input and assistance was critical in helping to formulate the 2012-13 budget.

The provincial government received ideas through the Taxpayers FIRST website on how to raise revenues and deliver public services more efficiently and effectively.

The message received through consultation is that the provincial government should:

●    become smaller, reduce costs and be more efficient;
●    increase revenue; and
●    focus on the needs of New Brunswickers as opposed to their wants.

●    continue to apply a number of wage restraint measures, including a two-year wage freeze for employees who have not yet participated and a freeze on upward reclassifications. The Christmas Holiday Leave Initiative, which generated more than $1 million in wage savings in 2011, will be repeated in 2012;
●    replace only those positions that are critical to the delivery of core government services, resulting in a net reduction in the size of the public service. This is expected to save more than $86 million by 2014-15;
●    reduce the maximum number of sick days that employees can accumulate to align it more closely to the qualifying period for long-term disability benefits; and
●    reduce the wage gap between men and women with the inclusion of $6.4 million. This is just the beginning of the provincial government’s investment in pay equity to conform to current legislative requirements.

The provincial government spends about $1.5 billion on procurement of various goods and services. The budget includes estimated procurement savings of $14 million for 2012-13, growing to an estimated $70 million annually by 2014-15.

Higgs said that finding cost and efficiency improvements in the delivery of programs and services are important government initiatives. The budget includes $55.1 million in program delivery savings across a number of departments. These include:

●    finding operational efficiencies in nursing homes will result in savings of $1.5 million;
●    setting costs per weighted case targets in the health-care system that are based on national averages; and working collaboratively in a wide variety of ways to drive down costs.
●    reducing unconditional grant funding to municipalities for 2012 by two per cent, providing savings of $1.4 million;
●    establishing a new accountability framework in the Department of Education and Early Childhood Development to ensure continual improvement in both cost savings and service delivery will save an estimated $1 million; and
●    effective March 31, 2013, the agreement providing supplemental funding to Horse Racing New Brunswick Inc. in support of the harness racing industry will be terminated, resulting in savings of an estimated $600,000 beginning in 2013-14.

Increasing revenues in a responsible manner

●    To provide additional revenue, effective June 1, 2012, the Real Property Transfer Tax will be increased to 0.5 per cent from 0.25 per cent, raising an estimated $7 million annually.
●    Effective April 1, 2012, the Financial Corporation Capital Tax will be increased to four per cent from three per cent, providing an estimated $5 million annually.
●    The budget contains projected revenue of $10 million from Crown asset sales in 2012-13. During the coming months, the provincial government will examine the business cases for other divestiture opportunities, such as the viability of owning and operating the government airplane and an extensive review of government vehicles and related policies.
●    The provincial government is developing a royalty system that will eventually see it receive its fair share of profits from the development of natural resources.

Phase One of the property tax reform plan, which consists of a four-year phase-in of property tax changes, will be implemented beginning with the 2013 property tax year. Phase One is a step forward in delivering on a commitment to make the property tax system more fair for the long term. Some of the areas that will be addressed include:

●    more equitable treatment of all property types, ensuring local services are paid for in a more fair manner;
●    a gradual reduction of the provincial residential property tax rate on apartments, second homes and cottages to bring it more in line with most other jurisdictions; and
●    a gradual reduction in the provincial business property tax rate, which is among the highest in Canada.

Details of these and other steps toward improving the fairness of the property tax system will be released in a white paper to be made available within several months.

Returning to balanced budgets by 2014-15

The provincial government has committed to a deficit reduction plan, including a three-year plan to return to balanced budgets. Higgs said the 2012-13 budget makes major strides in achieving these objectives. The goal is to budget for a $99-million deficit in 2013-14 and for a $6-million surplus in 2014-15. 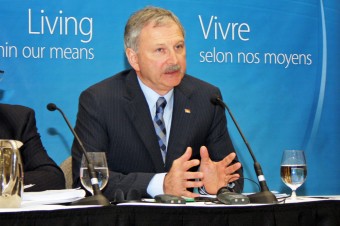