Public Safety
Office of the Premier

FREDERICTON (GNB) – The provincial and federal governments have reached an agreement to ensure the communities of Greater Moncton and Sackville will no longer be required to pay the full cost of RCMP contract policing.

“We are proud to have been part of the solution to these longstanding financial challenges for Greater Moncton and Sackville,” said Premier David Alward. “This new agreement will result in substantial savings in police costs. This is the result of a lot of hard work on all sides. I congratulate everyone involved for their co-operative spirit and willingness to work together in the best interest of the residents of Greater Moncton and Sackville.”

“I am pleased that the Government of Canada has reached an agreement with Moncton-Riverview-Dieppe and Sackville that will continue the relationship between the RCMP and the people of these communities for another two decades,” said Moncton-Riverview-Dieppe MP Robert Goguen. “When the new agreements take effect on April 1, the Greater Moncton and Sackville communities will no longer be required to pay the full cost of RCMP Contract Policing. Under the new contract, they will pay the same cost-share ratio as any other community of their size, representing a total cost savings of approximately $2.5 million annually for the affected communities.”

Starting April 1 the federal government will contribute 10 per cent of the cost of policing the Greater Moncton region. The municipalities of Moncton, Riverview and Dieppe will share the remaining 90 per cent cost.

For Sackville, the new agreement means the federal government will pay 30 per cent, with the town paying the remaining 70 per cent.

“I am pleased that we have found common ground with the federal government to ensure safety and security at a fair and reasonable cost for these communities and others across the province,” said Public Safety Minister and Solicitor General Robert Trevors. “We are proud to work in partnership with the RCMP to build a safe New Brunswick.”

In a separate agreement, the two governments have also finalized an agreement to maintain the RCMP as the provincial police force for the next 20 years.

The new contract runs from April 1, 2012, to March 31, 2032, and will give the provincial government greater control over staffing levels, policing standards and the construction of new detachments.

The agreement covers much of the province including 75 municipalities, four rural communities and all but two of the province's 266 local service districts.

The RCMP maintains a force of more than 900 regular members in New Brunswick who work in provincial and municipal policing, First Nation community policing and other specialized services. The force is supported by about 87 civilian members and 160 public service employees based in nearly 60 locations throughout the province. 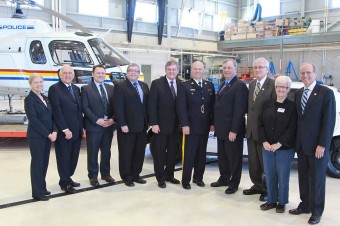