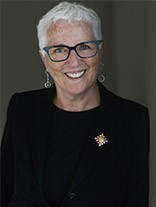 Her Honour is the former Executive Director of the Saint John Women’s Empowerment Network (WEN) (formerly known as the Urban Core Support Network), an organization she led for more than twenty years. In this role, she grew the organization through the development of a signature empowerment program for low income women in Saint John that was expanded to several other communities in the province. In keeping with her mission to ensure the voiceless were heard, she oversaw the development and implementation of an internship program for marginalized women. Additionally, she championed the membership of people with lived experience on the WEN Board of Directors and hiring committees and advocated for the same in both community and government agencies.

Ms. Murphy has been involved in various roles at all three levels of government. She was appointed as a member of the Gender Equality Network Canada – a network of diverse women leaders from across the country that collaborated on policy recommendations relating systemic barriers to gender equality. She was also a member of the Ministerial Advisory Committee on Poverty (2017 – 2018), working with a group of diverse leaders across the country to develop the terms of reference for the National Advisory Council on Poverty. Her Honour was a member of the New Brunswick Advisory Council on the Status of Women (2005 – 2008) and was part of the Voices of New Brunswick Women working group, which created the present New Brunswick Women’s Council. She helped form New Brunswick’s first Poverty Reduction Strategy and assisted in the development of legislation to create the Economic and Social Inclusion Corporation (ESIC). Ms. Murphy was a member of the inaugural board of directors of ESIC.

Ms. Murphy served three terms as a municipal councillor for the town of Grand Bay-Westfield, New Brunswick (2002 – 2012), including one term as Deputy Mayor and two terms as Chairperson of the Tourism committee.

Her Honour has volunteered with a variety of organizations, including the Community Heath Centre Advisory committee (1996 – 2004). As chairperson, she led the initiative to expand services that included Primary Health Care. She served as a director with   Hestia House shelter for women, the Coverdale Centre for Women, Housing Alternatives, the John Howard Society, and the Greater Saint John Community Foundation.

Her honour lives at Government House in Fredericton with her partner Linda Boyle and their cat, Leo. 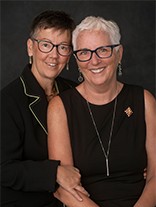 Linda Boyle is a happily retired educator and administrator. She received degrees in Arts and Education from St. Thomas University, and a Master’s degree in counselling from the University of New Brunswick (UNB). Linda began her career teaching at a private boarding school, then transitioned to adult education, holding a variety of teaching and administrative positions with the New Brunswick Community College (NBCC). She retired from her 30-year career at NBCC when her partner, Brenda Murphy, was appointed Lieutenant Governor of New Brunswick in 2019.

Ms. Boyle has great admiration for the non-profit sector, and she spent many years as the board president of the Saint John Learning Exchange, a non-profit providing academic and employment skills to adults. She was also an inaugural board member of the Saint John Pride Committee.

Her Honour loves to bake and play with power tools (not at the same time). She’s also very handy at moving big rocks and digging holes as directed by her gardening partner. She is thrilled to accompany Brenda on this wonderful adventure.