Grand Manan is a paradise for bird-watchers. Puffins and Arctic terns, marsh-dwelling cranes and heron, magnificent eagles and peregrine falcons -- the island boasts hundreds of species. 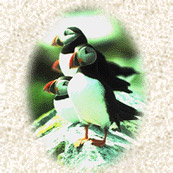 The outer island of greatest importance to bird-watchers is Machias Seal Island, 19 kilometres (12mi.) off Southern Head. This lonely outcropping is a nesting ground for a variety of marine birds. Arctic terns, Leach's petrels and common puffins spend the nesting season here before heading out to sea where they spend the remainder of the year.

The Machias Seal Island sanctuary is carefully supervised by both Americans and Canadians. During July, boats from Seal Cove, Grand Manan, will take bird-watchers for a memorable visit.

Over the years, Grand Manan has drawn many notable naturalists, including John James Audubon. In the early 1900s, island native Alan Moses convinced Sterling Rockefeller to purchase Kent Island off the coast of Grand Manan for a bird sanctuary to protect the eider duck. The island was later turned over to the Bowdoin College as a research station, which is still in operation today.

Moses dedicated his life to gathering and mounting several hundred specimens of island birds. These can be seen at the Grand Manan Museum in the Moses Memorial Bird Collection. This comprehensive collection is unrivalled in the region and is a must see for any avid bird-watcher.