Women's Equality Branch
You're receiving this message because you subscribed.
Not interested anymore? Unsubscribe
Subscribe to Women Femmes NB

In the News:
- There Are No ‘Women’s Issues’: There Are Just Issues
- UN Urges Action to Combat Online Violence Against Women
- World Leaders Agree: We Must Close the Gender Gap

On December 19, 2011, the United Nations General Assembly adopted Resolution 66/170 to declare 11 October as the International Day of the Girl Child, to recognize girls’ rights and the unique challenges girls face around the world.

This year, as the international community assesses progress under the Millennium Development Goals (MDGs) since their implementation in 2000 and sets goals to be achieved by 2030, girls born at the turn of the millennium have reached adolescence, and the generation of girls born this year will be adolescents in 2030. As we reflect on the achievements of the past 15 years and plan sustainable development goals for the next 15, it is an opportune time to consider the importance of social, economic, and political investment in the power of adolescent girls as fundamental to breaking the intergenerational transmission of poverty, violence, exclusion and discrimination and to achieving equitable and sustainable development outcomes.

Adolescent girls have the right to a safe, educated, and healthy life, not only during these critical formative years, but also as they mature into women. If effectively supported during the adolescent years, girls have the potential to change the world – both as the empowered girls of today and as tomorrow’s workers, mothers, entrepreneurs, mentors, household heads, and political leaders. An investment in realising the power of adolescent girls upholds their rights today and promises a more equitable and prosperous future, one in which half of humanity is an equal partner in solving the problems of climate change, political conflict, economic growth, disease prevention, and global sustainability. (…)

UN agencies, Member States, civil society organizations, and private sector stakeholders are called on to commit to putting adolescent girls at the centre of sustainable development efforts by making the following critical investments in their present and future: (…)

Are you organizing an activity for International Day of the Girl? Want to share your event with other New Brunswick girls? Send details of your IDG event to be posted on our website by emailing us at WEB-EDF@gnb.ca.  Please include: Date, region, name of event, event description (50 word max.), venue, time, and contact information (email, phone and/or website)

Trades & Tech Trade Show for Women – Saint John. There will be a Trades & Tech Trade Show for Women on Wednesday, October 21 from 6:30-9:00 p.m. at NBCC Saint John. Come explore exciting careers in skilled trades & technologies. Meet fascinating women working in these fields. Hear inspiring stories from dynamic guest speakers. This is your opportunity to meet with mentors while you enjoy investigating a variety of interesting career paths. Registration begins at 6 p.m. This is a free event. To register or for more info, please contact Kate McLean by email: kate.mclean@gnb.ca or call 1-877-253-0266. 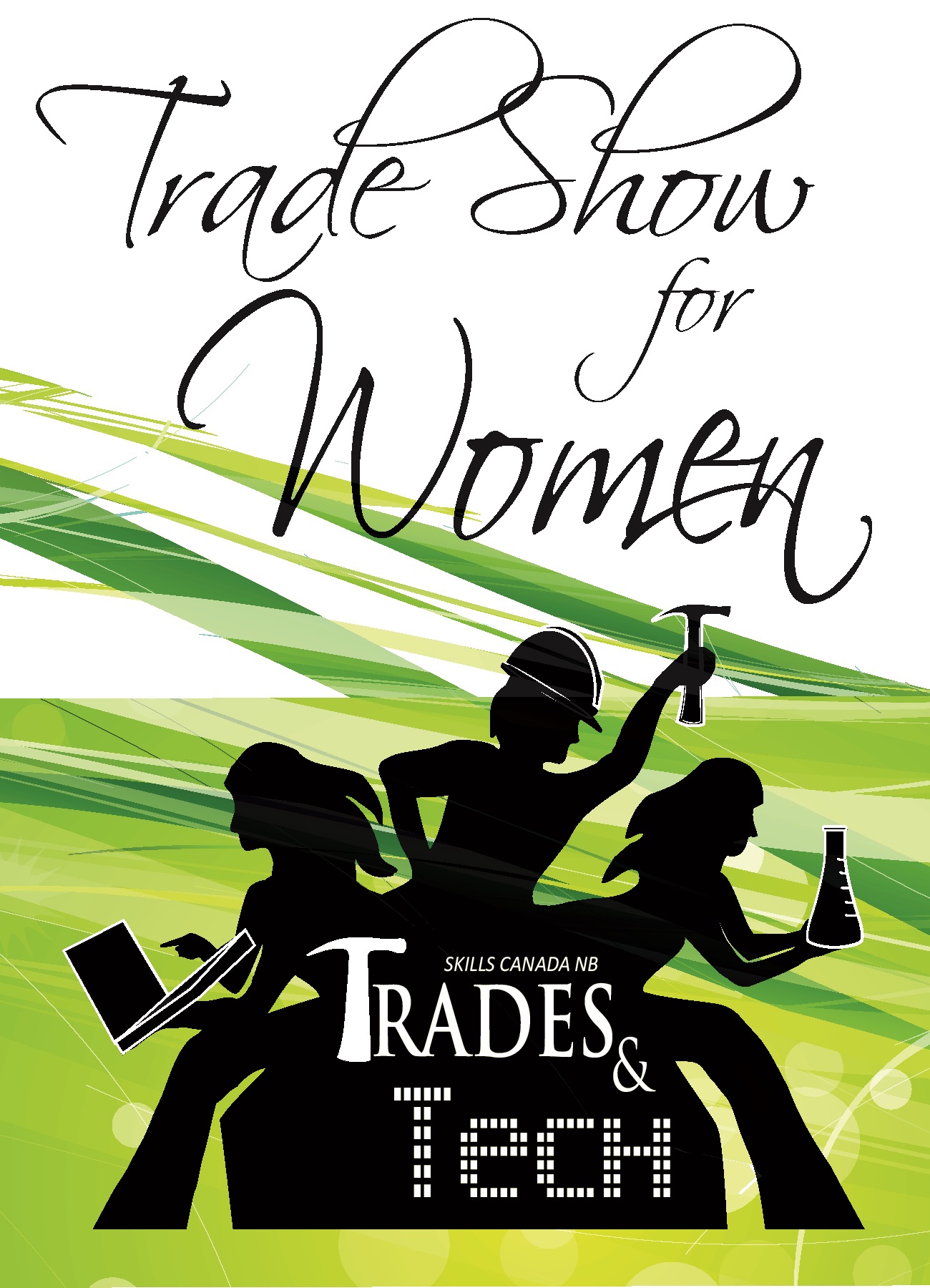 Canada Votes on October 19.  Ask Candidates What Will You Do to Address Gender Inequality? http://bit.ly/1FRNriE

World March of Women in Fredericton. Saturday, Oct. 17, 2015. The World March of Women is an international feminist action movement connecting grass-roots groups and organizations working to eliminate the causes at the root of poverty and violence against women. Schedule:

Voicefound (www.voicefound.ca) is offering a child sexual abuse prevention workshop in the Fredericton area on October 24, 10:00am-12:00pm. The Stewards of Children child sex abuse prevention workshop (http://www.voicefound.ca/…/fredericton-stewards-of-children/) is offered by authorized facilitator, Nathalie Daigle. Stewards of Children® is an evidence informed prevention solution that increases knowledge, improves attitudes, and changes child protective behaviours. This workshop is great for anyone who has contact with children, including students (social work, psychology, education, etc...), who may not have a lot of experience, but who would like to build up their resume. Cost: $25. Register here.

Did you miss the Up For Debate event in Toronto on Monday? You can watch it on the Toronto Star website, which also has the full length video of the interviews. You can also read the transcripts of all of the Leader interviews here (note: questions and responses are given in the language they were asked or answered).

Including Immigrant Women in a Community Coordinated Response to Family Violence, November 12 at MacLaggan Hall (Faculty of Nursing), Room ML53, 53 Dineen Drive, UNB Fredericton. The day will feature the voices of diverse immigrant women reflecting on the challenge of speaking out on the issue of family violence amongst immigrant groups while at the same time coping with the daily realities of life on the margins of society. The perspectives of community allies such as those from immigrant settlement services, cultural associations, universities, government and domestic violence service providers will also be shared. Simultaneous translation will be available. For more information or to register, please contact Kim Wade at kwade@unb.ca or (506) 453-3595.

Bangladeshi child brides - in pictures. Recently, Human Rights Watch released a damning report about child marriage in Bangladesh. The country has one of the highest rates of child marriage in the world, with 29% of girls marrying before the age of 15, and 65% before they turn 18. Pregnant girls from 15-20 are twice as likely to die in childbirth as those 20 or older, while girls under 15 face five times the risk. Research cites spousal age difference as a significant risk factor for violence and sexual abuse http://bit.ly/1Icm90v

Marry Before Your House is Swept Away, Child Marriage in Bangladesh – Report from Human Rights Watch

For the 2011 general election women participated at a higher rate (59.6%) than men (57.3%), and this was true across all age groups up to age 64, where men started participating more than women.
http://bit.ly/1FkMQBs

There Are No ‘Women’s Issues’: There Are Just Issues

You might not have heard, but there was another election “debate” this week.

No, not the French-language debate set for Thursday night, but a “women’s issues” debate-turned panel hosted by a slew of groups under the umbrella UpForDebate.

The goal was to host all party leaders for a lively discussion of the challenges facing Canadian ladies, but instead organizers settled for pre-taped answers from three of the party heads — all participated except Conservative leader Stephen Harper, who covered off his “women’s issues” flank with a Chatelaine interview and a request to stay a court challenge that tried to bar a Muslim woman from wearing a niqab at a citizenship ceremony.

The women’s issue debate was relegated to obscurity before before it even started: The most tweeted moment wasn’t even about women, exactly, but Liberal Leader Justin Trudeau’s comments that “certain types” of music and absent fathers are to blame for domestic violence — which was immediately and rightly lambasted as a subtle sort of racism targeted at black communities.

As much as the sentiment behind UpForDebate is laudable, moderator Laura Payton nailed it when she suggested that perhaps it’s time to retire the phrase “women’s issues.” Now, Canadian women are treated like a special interest group as opposed to the majority of the population — perhaps Stephen Harper was almost right not to participate, since it’s beyond time for women’s issues to be part of general discussions instead of punted to the side. (…)

Women’s issues aren’t some special, separate silo. They touch everything, from the economy to health care to crime rates to national defence.

Almost three quarters of women online have been exposed to some form of cyberviolence, says a new UN report.

The United Nations is calling on both the public and private sector to do more to stem the tide of violence against women online.

A report released by the United Nations Broadband Commission on Thursday called violence against women online a "problem of pandemic proportion." The report, entitled "Cyber Violence Against Women And Girls," found that 73 percent of women online have been exposed to or experienced some type of cyberviolence. Among the 86 countries included in the survey for the report, only 26 percent of law enforcement agencies have taken action against such violence.

Violence against women in cyberspace has repercussions throughout society, not just the online world, according to the report. Stalking as well as threats of rape and even death impact the status of women on the Internet. It also taps into financial resources such as legal fees, online protection and missed wages as women are forced to protect themselves. Further, such violence can affect free speech as women become afraid to voice their opinions online.

The report revealed several key findings. Women ages 18 to 24 are likely to be victimized by stalking and sexual harassment as well as physical threats. Among the European Union's 28 countries, 9 million women have experienced online violence, some of them as young as 15. One out of every five female Internet users live in countries where online harassment is not likely to be punished. Further, women in many countries are hesitant to report online harassment due to fear of social consequences. As one example, data from India indicates that only 35 percent of women in that country have reported online violence.

World Leaders Agree: We Must Close the Gender Gap

Today, some 80 world leaders are convening at the United Nations to personally commit to ending discrimination against women by 2030 and announce concrete and measurable actions to kick-start rapid change in their countries. The event marks a historic first, with pledges delivered by Heads of State and Government. No other single issue is to receive this level of political attention at the UN Summit held from 25-27 September to adopt Agenda 2030 and its Sustainable Development Goals. (…)

Commitments are expected to cover a range of issues addressing the most pressing barriers for women, such as increasing investment in gender equality, reaching parity for women at all levels of decision-making, eliminating discriminatory legislation, and addressing social norms that perpetuate discrimination and violence against women. (…)

President Xi Jinping announced that to support women's development worldwide and the work of UN Women, China will contribute USD 10 million for the implementation of the Beijing Declaration and Platform for Action and the realization of the related goals in the post-2015 development agenda. President Xi further said China will support women and girls in other developing countries by providing health care, vocational training, financing for education and other assistance. In his opening remarks, UN Secretary-General Ban Ki-moon directly addressed the assembled world leaders, saying: “As Heads of State and Government you have the power and the responsibility to ensure that gender equality is—and remains—a national priority.” He continued to outline three areas for action: “First, I urge you to create and energetically implement coherent gender equality policies. Second, provide significant financing for gender equality so that commitments become reality. And third, monitor progress so that all governments will hold themselves and each other accountable for the pledges made here today.”

“I think it is right that women be involved on my behalf in the policies and
decision-making of my country.”

Send us your news:

To Submit a Notice
to the WEB Newsletter, please send it in text format (in Word or in the body of an e-mail) to web-edf@gnb.ca by 12 pm on Fridays. Please note that notices will run for a maximum of two newsletter issues. Notices must be no longer than 100 words, and include all pertinent information including but not limited to:

To Submit an Article
for consideration, please ensure it is 300 words or less, with a web link to the continuation of the article or for more information if available.

**Text from non-governmental sources will be published in the language(s) in which it is provided.