National Day of Remembrance and Action on Violence Against Women

FREDERICTON (GNB) – A candlelight memorial to commemorate the National Day of Remembrance and Action on Violence Against Women was held today in Fredericton in memory of the 14 young women killed at the École Polytechnique in Montreal 29 years ago.

“The 14 young women we are remembering today were singled out and robbed of their future for one reason: because they were women,” said Service New Brunswick Minister Sherry Wilson, who is also the minister responsible for women’s equality.

Today’s vigil falls within the United Nations’ 16 Days of Activism against Gender-Based Violence Campaign. The campaign began on Nov. 25 with the International Day for the Elimination of Violence Against Women and will end Dec. 10 with Human Rights Day. This 16-day period is a time to initiate action to end violence against women and girls.

At this vigil, candles were lit in memory of the 14 young women who lost their lives while studying at the engineering institution. Following the moment of silence observed in their honour, Lesley Monaghan, performed the Silent Witness song I’ll Stand in the Rain.

“We all have a right to live free from abuse and violence,” said Wilson. “I encourage New Brunswickers to remember the lives we have lost and to consider how we, as a society, can take action to eliminate violence against women.”

Several MLAs, civil servants, and representatives of community organizations that provide services to women and children who are victims of violence attended the memorial. 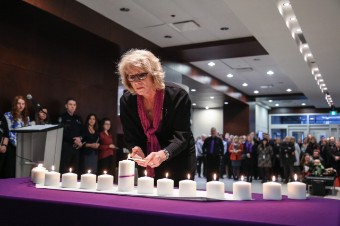