SALMON RIVER (GNB) – The Fundy Trail Parkway, the Fundy Footpath and the Fundy Cycling Route have been added to the list of 11 Signature Trails highlighted in the recently announced Trails Action Plan.

Another attraction in the region, the Fundy ATV Trail Network, was named to the list earlier this month.

“We have identified these trails as economic tourism revenue opportunities,” said Tourism, Heritage and Culture Minister John Ames. “They are set in distinctive landscapes that reflect our region’s natural beauty and unique landscape. We are committed to developing quality trails in the province, and we recognize the importance that trails such as these have on our economic tourism growth and community development.”

Signature Trails are an important part of the Trails Action Plan, a $15.78-million investment in the province’s trails network. Eleven Signature Trails have been designated for development, from signage upgrades to infrastructure to long-term management plans.

“This is great news for the Fundy region,” said Jane Boyle, president of the Fundy Trail Development Authority. “The province’s investment in trail development for these three trails will raise our park’s profile as a signature tourism destination on an international level.”

The Fundy Trail Parkway is a 19-kilometre scenic drive along the coastline east of St. Martins. It incorporates a network of walking, hiking and cycling trails, and attracts about 45,000 visitors annually. It is operated by the provincial government and the Fundy Trail Development Authority.

The 49-kilometre Fundy Footpath runs along the coastline between Fundy National Park and the Fundy Trail Parkway. It is operated by a local non-profit organization and showcases tidal estuaries, Acadian forest and canyon-like river valleys.

“The Fundy Footpath is a hiker’s paradise,” said Marc Leger, Fundy Footpath trailmaster with the Fundy Hiking Trails Association. “We are thrilled to see this additional investment in our province’s trail systems, which is sure to draw more visitors to the Fundy region.”

The Fundy Cycling Route is not yet developed. Once completed, it will stretch 85 kilometres from St. Martins to Alma and will provide cyclists yet another opportunity to experience the Bay of Fundy coast.

Signature Trails are major regional tourism attractions. They encompass distinctive landscapes and vistas, from the Appalachian Mountain Range and Acadian forests to city waterfronts and coastlines. The Trails Action Plan is intended to elevate the network of over 20,000 kilometres of developed trails by improving accessibility, safety and overall user experience.

The New Brunswick Tourism Growth Strategy will invest $100 million in tourism over the next eight years, with a goal of growing tourism-related GDP to $2 billion by 2025. Tourism visitor spending is estimated at $1.3 billion, making it the third-largest service sector in the province. 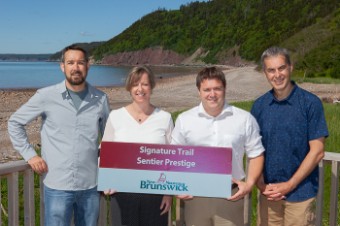