“Tourism is a key component of your government’s multi-year economic growth plan,” said Premier Brian Gallant. “Enhancing the services available at Sugarloaf will help us reach our potential as a four-season tourism destination.”

Installation of the new chairlift will begin in the spring. A contract valued at $2.4 million was awarded, through a competitive tendering process, to Doppelmayr for the purchase and installation of the chairlift. Additional work on the project will include demolition of the existing infrastructure and slope preparation, for a total estimated project cost of $3 million.

The new chairlift will be a fixed grip quad with a loading conveyor. It will have an uphill capacity of 2,000 people per hour and a family of four will be able to ride the chair together. Mountain bikers, who previously had to ride the chair alone with their bikes, will now be able to share the ride with other bikers.

This funding is in addition to an investment of $2.6 million to purchase snow-making equipment and a new trail groomer for the park’s ski hill.

The government sees New Brunswick as a four-season tourism destination and recognizes the economic benefits and potential growth within the tourism sector. The New Brunswick Tourism Growth Strategy will invest $100 million in tourism over the next eight years, with a goal of growing tourism-related GDP to $2 billion by 2025. Tourism visitor spending is estimated at $1.3 billion, making it the third-largest service sector in the province. This year, the provincial government is investing $2 million in signage infrastructure and product development to encourage tourists to explore New Brunswick’s five scenic drives. Enhancing this network is the foundation of the government’s Tourism Growth Strategy, which aims to make New Brunswick the destination of choice for travellers in the Maritimes. 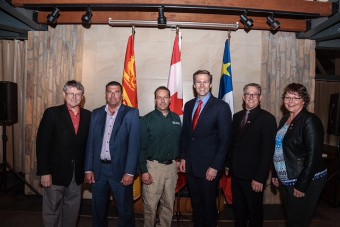