HAMPTON (GNB) – The provincial and federal governments announced almost $100,000 in combined funding today for a renewal project at the Lighthouse River Centre in Hampton to promote increased use of the centre and the adjacent park.

“The centre, which is beautifully situated on the banks of the Kennebecasis River, will expand its use as a location for community programming,” said Environment and Climate Change Minister Gary Crossman, who is also minister responsible for the Regional Development Corporation. “These facilities are central to the overall well-being of individuals, families and the community.”

Improvements include building a deck and accessible washrooms as well as creating an internet centre available to residents and visitors.

“I am so pleased the Government of Canada, through the Atlantic Canada Opportunities Agency (ACOA), can support the Town of Hampton’s project,” said Saint John-Rothesay MP Wayne long. “The improvements at the Lighthouse River Centre will help more residents, particularly students and newcomers, connect to the internet, as well as increase much-needed accessibility to the centre’s washrooms.”

“What an amazing day for the residents of the Greater Hampton region,” said Hampton Mayor Robert Doucet. “This federal and provincial government investment for the Lighthouse River Centre community renewal project will allow for the adaptation of the building to create a space for performance events, community group activities, and enhanced access to the adjacent public green space, taking full advantage of the Lighthouse River Centre’s commanding spot along the Kennebecasis River. The adaptations to the centre will allow it to be a hub of community activity that genuinely serves all members of the public, and a destination for visitors alike.” 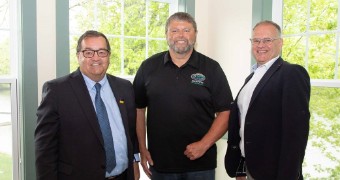