EDMUNDSTON (GNB) – A 59-year-old Grand Falls man has been sentenced to fines of $132,317 for transporting unstamped tobacco products. Camille Rossignol was sentenced on Jan. 16 after pleading guilty in Edmundston provincial court last October. He was charged under two sections of the Tobacco Tax Act.

In addition to the fines, the 2002 Chevrolet Venture van driven by Rossignol at the time of his arrest was forfeited as offence-related property.

The guilty plea followed enforcement activities that took place on April 29, 2018. Department of Public Safety enforcement officers arrested Rossignol after a search warrant was executed at his Grand Falls property and a search of his van uncovered 100,562 unstamped cigarettes.

The provincial tax value of the seized tobacco is estimated at $25,686.

Under Section 2.2(1) of the act, it is an offence to possess tobacco where taxes have not been paid. The minimum fine is $2,000 plus an additional five times the value of the tax payable. Under Section 2.2(1.6), it is an offence to possess more than five cartons or 1,000 cigarettes. The minimum fine is $2,000. 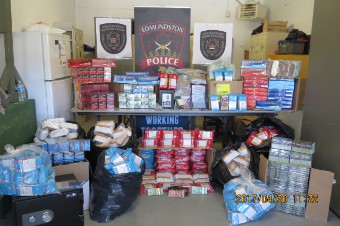