Called Exercise Brunswick Bravo 2019, the one-day effort will give municipalities, First Nations and local service districts an opportunity to practise their respective roles during an emergency event.

All New Brunswick communities are invited to participate and take advantage of this learning opportunity in emergency response planning and testing.

“Communities are the first line of defence during a crisis,” said Public Safety Minister Carl Urquhart. “Giving people at the local level the opportunity to validate their emergency plans is essential to building resilient communities.”

The exercise is being organized by the New Brunswick Emergency Measures Organization in partnership with the Canadian Armed Forces, through Joint Task Force Atlantic.

“Working in partnership with the New Brunswick Emergency Measures Organization for a second year to design and execute a training event building on the successes of last year reminds us of how valuable this training is,” said Rear Admiral Craig Baines, Commander Joint Task Force Atlantic. “We continue to see more frequently the requirement for all organizations to understand one another’s capabilities and processes so we can better co-ordinate and effect response when communities call.”

Brunswick Bravo 2019 will allow community staff involved in emergency management to practise planned responses and other procedures at any level they choose, from simple to complex.

The exercise scenario will be a continuation of Exercise Brunswick Alpha 2018, a simulation of a severe weather event that unfolded across the province. Brunswick Bravo will focus on response as a result of the impact of the storm. About 80 organizations are taking part in the initial planning conference on Dec. 5. Participation in Brunswick Alpha is not a prerequisite for participating in Brunswick Bravo.

Municipal, local service district and First Nations participants will also be invited to take part in the planning over the coming months.

“We look forward to continuing the momentum and success of Exercise Brunswick Alpha. More than 100 communities participated to varying degrees and learned a great deal about their plans and state of preparedness,” said Greg MacCallum, director of the New Brunswick Emergency Measures Organization. “Given how well everyone performed during Brunswick Alpha, we hope communities will challenge themselves further next year.”

The Emergency Measures Organization co-ordinates preparedness for emergencies, working at provincial, regional and municipal levels to ensure communities are protected during all phases of an emergency. It also co-ordinates provincial response operations during emergencies and administers disaster financial assistance programs during recovery. 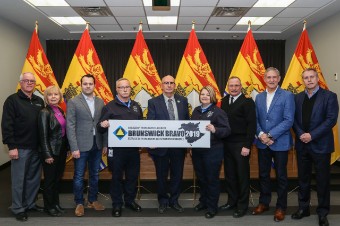