MIRAMICHI (GNB) – Enforcement officers with the Department of Justice and Public Safety, in partnership with the Miramichi Police Force, seized 513,000 unstamped cigarettes, $12,232 in cash, 145 methamphetamine pills and 25 hydromorph pills on March 25, following a five-week investigation.

Hannah received fines totalling $657,421 for the tobacco-related offences, and was sentenced to 23 months incarceration for the two offences under the Controlled Drugs and Substance Act.

In addition to the fines and incarceration, the Chevrolet Express van and cash were ordered to be forfeited to the Attorney General.

Revenue from the sale of illegal tobacco is often funneled into organized crime and supports the underground economy in New Brunswick. Illegal tobacco works against government cessation programs and poses a greater risk to increased smoking rates for youth. Smoking is the most prevalent cause of premature death in Canada; each day, 100 Canadians die of a smoking-related illness. 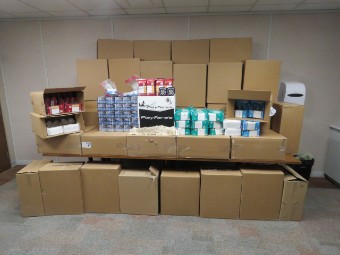