FREDERICTON (GNB) – With prom and graduation season approaching, the provincial government reminds young people that driving under the influence of alcohol puts themselves and others at serious risk.

“We wish all young New Brunswickers a safe and happy prom and graduation ceremony this June,” said Justice and Public Safety Minister Denis Landry. “Do not put your future in jeopardy by making poor decisions in times of celebration. If you drink even a small quantity of alcohol, you should never drive.”

Landry said drivers of all ages should be aware that amendments to the Motor Vehicle Act last November make New Brunswick one of Canada’s toughest jurisdictions with respect to dealing with alcohol-impaired drivers. All drivers must respect these laws to keep themselves and others safe. It is illegal to drive while impaired by any substance. A new law focused on consequences for drivers impaired by drugs will be implemented later this year.

Mothers Against Drunk Driving (MADD) Canada recommends graduates and their friends and families consider the following options to keep themselves and other motorists safe while celebrating:

In addition to the risk of injury or death, young people should note that there are other serious consequences for impaired drivers under the Motor Vehicle Act. A motorist caught with a blood alcohol content level within the warning range of 0.05 and 0.08 per cent is subject to a short-term licence suspension. Drivers with a blood alcohol content level of 0.08 per cent or higher can have their vehicle impounded for up to two months.

There is a zero-tolerance policy for new drivers in the graduated licence period. If these people are caught driving with a blood alcohol content level above zero, they will have their licence suspended for a week. New drivers convicted of an alcohol-impaired driving offence will receive a one-year driving suspension and will have to restart the process of getting their licence.

“Young drivers, like all motorists, must play their part in keeping our roads safe for everyone,” said Susan MacAskill, MADD Canada’s Atlantic region manager. “By planning ahead and being responsible, we can greatly reduce preventable injuries and fatalities.”

The legal drinking age in New Brunswick is 19. 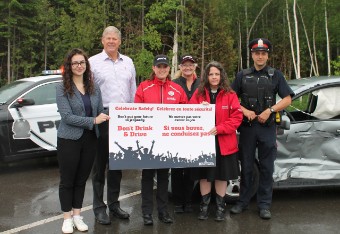