Office of the Premier
Opportunities NB

145 new IT jobs in Fredericton

FREDERICTON (GNB) – A total of 145 new jobs in the information technology (IT) sector will be created with the establishment and expansion of a new Aboriginal software testing company, Premier Brian Gallant announced today.

“These jobs that are being created are an example of how New Brunswickers are innovative and our technology sector is strong,” said Gallant. “It is inspiring to see that this initiative means more tech sector jobs for New Brunswick as well as more opportunity for education and training for First Nations.”

Professional Aboriginal Testing Organization (PLATO) is a new business, established by Fredericton businessman Keith McIntosh to give back to the community and to address the ongoing challenge of finding enough qualified people to do software testing. McIntosh is co-chief executive officer of Professional Quality Assurance (PQA), which is based in Fredericton with offices in Moncton, Halifax, Calgary and Vancouver.

“Across Canada there is a significant shortage of skilled people in the IT industry that needs to be addressed,” said McIntosh. “At the Governor General’s Canadian Leadership Conference last summer, I learned about some of the challenges First Nations people face with under-employment and fewer entrepreneurial opportunities. At the conference, we were challenged as leaders as to what we can do to inspire and implement innovation in our organizations and communities.”

McIntosh’s response to the challenge was to first create and fund the PQA Aboriginal Software Testing Initiative in partnership with the Joint Economic Development Initiative. The six-month program is designed to produce qualified software testers.

“I decided that, by creating an ongoing training program to produce qualified software testers, I could then create an independent company especially designed to provide good employment opportunities with solid career paths in an energetic growth industry for First Nations communities,” said McIntosh. “The new company is also a great asset to the continued growth of PQA.”

The new company has 10 employees delivering outsourced testing services as the result of the first graduating class earlier this year. Up to 87 new jobs will be created as more students complete the six-month training program. The company will be 100-per-cent Aboriginal staffed, run and owned.

As the new testing organization expands its workforce, up to 58 new jobs will be created at PQA, which offers services such as functional testing solutions, test automation, frameworks and harnesses, performance and load testing, content verification, consulting and training.

Opportunities NB is a Crown corporation that seeks to attract and support opportunities to grow the economy and create jobs. It provides support services for businesses across the province. 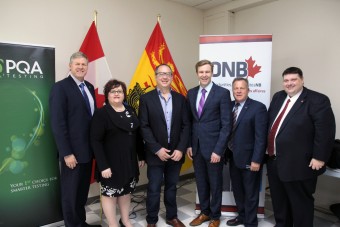