SAINT JOHN (GNB) – A provincial program aimed at supporting and mentoring women in apprenticeable trades has been extended by three years.

New Boots: Progressing Women in Trades was launched in April 2018 following a 30-month pilot project. It is sponsored by the Department of Post-Secondary Education, Training and Labour and led by a non-profit organization, Mentor Apprentice Program Strategic Workforce Services. The program has also been supported by the New Brunswick Building Trades Unions.

“The New Boots program has continued to be proven successful and not only am I pleased to see it continue; our government is taking steps to ensure that it will,” said Post-Secondary Education, Training and Labour Minister Trevor Holder. “It has succeeded in getting more women to register for apprenticeship and has been an important resource hub for women in construction-related skilled trades.”

“We are very pleased with today’s announcement for the continued support of the New Boots program,” said Jean Marc Ringuette, president of New Brunswick Building Trades Unions. “Over the past five years the New Boots network has expanded from a cohort of 14 tradeswomen to over 250 tradeswomen today. Employers are also seeing an increase in women filling positions in the skilled trades”.

Priority areas for the program over the next three years include aligning with: department objectives related to training and labour; poverty reduction and women’s equality initiatives under the New Brunswick Family Plan Framework; the Social Development Strategic Plan; and the government’s economic growth and development targets.

“Our partnership with New Boots resulted in nine women investing in developing skilled trades through our Skilled Trades Exploration Program for Women last year and joining our team,” said Linda Speedy, vice-president of human resources with J.D. Irving Ltd. “As we continue to grow our business and invest in the region, we look forward to continuing partnerships with government and community agencies that focus on increasing the representation of women and other underrepresented groups in our workplace.”

Since its inception, the New Boots program has established connections for and among hundreds of female trades workers around the province. Program goals over the next three years include: connecting 36 women annually to a skilled trade job; increasing the program’s social media presence by 25 per cent; creating new opportunities for participants by fostering relationships among trades groups and employers; and finding more tradeswomen who can serve as counsellors to those who may face barriers entering male-dominated trades. 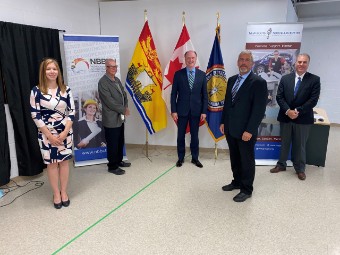