“Population growth is crucial to the future success of our province,” said Post-Secondary Education, Training and Labour Minister Trevor Holder. “The attraction and retention of new Canadians is critical to helping us increase our province’s population and meet the needs of our employers.”

“The New Beginnings strategy delivers ambitious immigration goals and ultimately provides us with a roadmap for economic growth and renewed prosperity in New Brunswick,” said Moncef Lakouas, president of the New Brunswick Multicultural Council. “When newcomers are fully included in all aspects of society, they become partners in growing our economy and enriching the social and cultural life of our province.”

The strategy focuses on three targets:

To achieve these targets, 60 actions have been developed as part of a plan that outlines four objectives and their subsequent initiatives. The objectives are:

The strategy was created to address current and future labour market needs and is built on past successes and recent initiatives, such as the Atlantic Growth Strategy and the New Brunswick Multicultural Council’s New Conversations Post-Tour Report.

The strategy and action plan are available online. 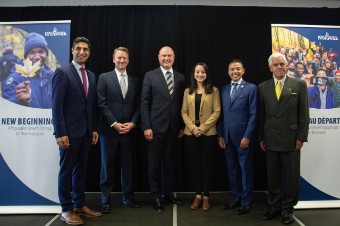