“It is an honour to represent the provincial government at this meeting of the 88 member states and governments of the International Organization of La Francophonie,” said Allain. “Our attendance at the summit demonstrates the importance we place on consolidating and strengthening New Brunswick’s ties with the member countries and states of La Francophonie, particularly when it comes to the economy.”

Alongside the summit, Savoie will be attending the 43rd Ministerial Conference of La Francophonie and taking part in the first official visit to a Canadian school, École Galileo Galilei, in Tunis. The school has about 200 students from kindergarten to Grade 7 and delivers New Brunswick’s francophone school curriculum.

“The use of our province’s francophone school curriculum to deliver an education to students at this school in Tunisia highlights New Brunswick’s expertise and sound reputation in the area of public education, notably through the program Écoles francophones internationales autorisées (authorized international francophone schools),” said Savoie. “Our delegation’s participation in the Francophonie Summit will provide an opportunity to showcase our province’s full capabilities in a range of areas, including public education.”

The delegation will also include Kent South MLA Benoît Bourque and various francophone representatives of the provincial government. Kiosks will be set up to promote the province among the participating countries; the francophone sector of the Department of Education and Early Childhood Development, the Université de Moncton, the Collège communautaire du Nouveau-Brunswick, the Société Nationale de l’Acadie and immigration advisors with Opportunities NB will be at the Village de la Francophonie until Nov. 22.

As a member government of the International Organization of La Francophonie since 1977, New Brunswick is an active participant in the achievement of the organization’s objectives, especially in the fields of education and vocational and technical training, youth, the economy, children’s rights and sustainable development. 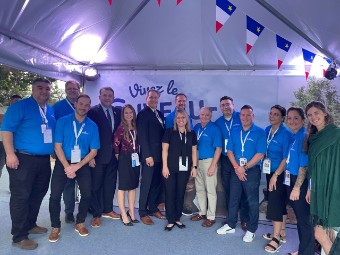