New Brunswick to participate in ministerial conference of the Francophonie

MONACO (GNB) – Tourism, Heritage, and Culture Minister Robert Gauvin, who is also the minister responsible for La Francophonie, is representing New Brunswick at the 36th session of the Ministerial Conference of La Francophonie taking place in Monaco today and tomorrow.

“The membership of New Brunswick in the International Organization of La Francophonie is an important means of promoting our culture and expertise on the international stage, and also of opening doors for new partnerships in the areas of business and tourism,” said Gauvin. “I am using this conference as a means of reaffirming our province’s full and meaningful participation and engagement.”

Discussions will take place on the progress achieved since the last Francophonie Summit held in Armenia; the implementation of the four-year workplan for 2019-22; the financial management of the organization; and guidance and governance issues for the Francophonie. Current issues relating to the political situation in the global francophone area will also be discussed.

The ministerial conference is one of the three bodies enshrined in the Charter of La Francophonie along with the Summit and the Permanent Council.

The next Francophonie Summit will be held in Tunis, Tunisia, in 2020, marking the 50th anniversary of the organization.

Since 1977, the provincial government has been a full member of the International Organization of La Francophonie, which enables the province to promote New Brunswick’s technological, environmental, educational, university, college, cultural, sport, and economic potential on the international scene. 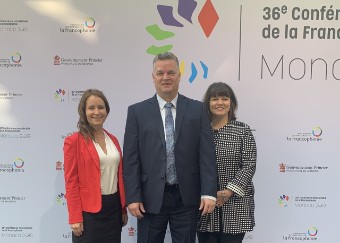