FREDERICTON (GNB) – The following message was issued by Economic Development Minister Francine Landry, who is also the minister responsible for La Francophonie:

On behalf of the provincial government, I congratulate renowned Acadian author and playwright Antonine Maillet, who today received one of France’s highest honours, the rank of Grand Officer of the National Order of Merit.

French Secretary of State to the Minister of Europe and Foreign Affairs Jean-Baptiste Lemoyne presented the prestigious award to Ms. Maillet during a ceremony in Paris. The secretary general of the International Organisation of La Francophonie, Michaëlle Jean, was also in attendance.

Founded by General Charles de Gaulle, the order recognizes distinguished military or civil contributions to the French nation. Like the Legion of Honour, the order is universal and honours people from all fields of endeavour.

The first non-European woman to win the Prix Goncourt, for her novel Pélagie-la-Charette in 1979, and the author of the celebrated play La Sagouine, Antonine Maillet embodies the values of the Francophonie and is an emblematic figure of Acadian and francophone literature. A member of the Royal Society of Canada, a companion of the Order of Canada, an officer of the Legion of Honour, chancellor emeritus of the Université de Moncton, and a member of the Order of New Brunswick, she is the ambassador par excellence of the Acadian people, and her contribution to the development and promotion of francophone literature and Acadia around the world is inestimable.

This year, New Brunswick is celebrating the 40th anniversary of its becoming a full member of the International Organisation of La Francophonie, which enables the province to showcase its potential on the international scene in diverse fields such as education, economics, the environment and culture. 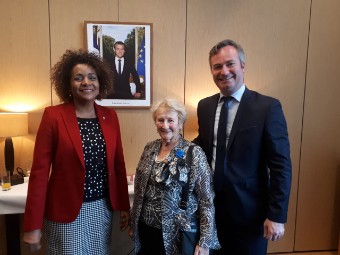