FREDERICTON (GNB) – The provincial government has announced actions aimed at protecting and promoting New Brunswick's forestry industry in light of the decision by the United States government to levy duties against New Brunswick exporters.

Treasury Board President Roger Melanson, who is the minister responsible for Trade Policy, and Energy and Resource Development Minister Rick Doucet visited Devon Lumber, a Fredericton-based sawmill, today. The business is one of many affected by the preliminary decision of the U.S. Department of Commerce to impose countervailing duties on softwood lumber from Canada.

“This duty is unfair, particularly to the employees, families and communities caught in the middle,” said Melanson. “The reality is that nothing has changed regarding the circumstances that have sustained our historic 35-year exemption. We are working hard to ensure an exclusion in support of New Brunswick’s interest, side by side with our partners in the federal government.”

“I want these workers, their families, and their communities to know this: your government will be doing everything within its power to fight for the historic Maritime exclusion on softwood lumber exports from New Brunswick sawmills,” said Doucet. “At the same time, we must be careful not to take actions that might be interpreted as subsidies and exacerbate the situation.”

“Forestry is a key part of New Brunswick’s economy,” said Harry Gill, owner of Devon Lumber. “It provides jobs in communities across our province. That is why we need everyone to work together to see this situation brought to a prompt resolution.”

The government will continue making its case that New Brunswick should be exempt from duties based on the dynamics of its market. It will:

Deputy premier Stephen Horsman will lead a trade mission, including forestry exporters, to China this spring. Melanson will lead a similar mission to Europe. A followup mission to China is planned for the fall.

“Together, industry players and the government are taking a unified approach,” said Mike Legere, executive director of Forest NB. “We will continue to show that we are fair traders, we play by the rules, and we have done so for more than 35 years.”

Melanson and Doucet will also be organizing a meeting between New Brunswick industry representatives and the federal government in the coming weeks.

“All players, large and small, are working together to get through these uncertain times,” said Glen Warman, vice-president of wood procurement at Marwood Ltd. in Tracyville. “We appreciate the approach the provincial government is taking and that they are working to protect and promote New Brunswick’s industry.”

Premier Brian Gallant and other government representatives have been lobbying the federal and American governments in support of New Brunswick’s exclusion since 2014. The provincial government has made submissions to the United States Department of Commerce, calling for an open, undistorted market for New Brunswick lumber. Melanson was in Boston last week, discussing the matter with officials of the Massachusetts state government, and did the same during an advocacy mission to Augusta, Maine, earlier this month. 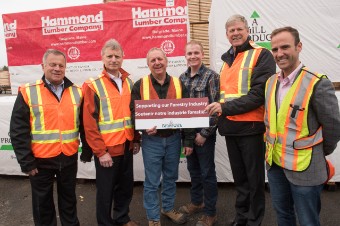