Finance and Treasury Board
Office of the Premier

Status update on negotiations with CUPE

FREDERICTON (GNB) – Negotiations with the Canadian Union of Public Employees (CUPE) have reached an impasse, with the union demanding annual wage increases of three per cent over a four-year period. CUPE threatened on Wednesday to take strike action.

“We have demonstrated our commitment to working with CUPE bargaining units to reach a fair deal,” said Premier Blaine Higgs. “If our schools and our health-care system are targeted by strikes, this will cause pain and harm the safety and security of New Brunswickers. We are prepared to take necessary action, possibly including legislation, to keep New Brunswickers safe and healthy with access to essential services, particularly during the COVID-19 pandemic.”

The government is now willing to offer wage increases of 8.5 per cent over a five-year period. This increase corresponds with agreements reached this fall with three other bargaining units.

The offer would also include raising the salary for casuals to be 100 per cent of the salary paid to permanent staff; sustainable pension plans for existing plans that were in jeopardy; and the opportunity for workers who have not previously qualified, to participate in a pension plan.

The cost of wage increases over five years would be about $55 million annually, with an additional $8 million for casual workers.

“We need to find a balance that benefits all New Brunswickers,” said Higgs. “These are fair and reasonable increases and they demonstrate the province’s commitment to its workers. As we navigate the remainder of this pandemic, we will continue to be prudent with taxpayers’ money as we build towards a brighter future.” 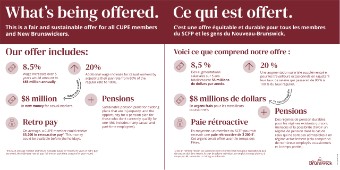 Erika Jutras, communications, Department of Finance and Treasury Board, erika.jutras@gnb.ca.