“For the third year in a row, our economy is growing at a rate faster than predicted by private sector economists. We are seeing our revenues grow while continuing to beat our fiscal targets,” said Finance Minister Cathy Rogers. “While we continue to forecast modest deficits over the next few years, these will be on average 1.3 per cent of expenditures based on our multi-year plan.”

Overall, the surplus is an improvement of $259 million from budget. This includes a $150-million improvement on revenue, largely due to corporate income taxes, and a $109-million decrease in expenditures, largely due to lower-than-expected expenses in central government, debt servicing costs and economic development. Although economic development expenses were lower than budgeted, they increased year-over-year by more than $40 million.

The government has now exceeded its deficit reduction targets for budgets tabled in 2017, 2016 and 2015.

“We have turned our economy around while making crucial investments in education, health care, infrastructure and other important public services,” said Rogers.

“In my opinion, the consolidated financial statements present fairly, in all material respects, the financial position of the Province of New Brunswick at March 31, 2018,” MacPherson wrote in her report. 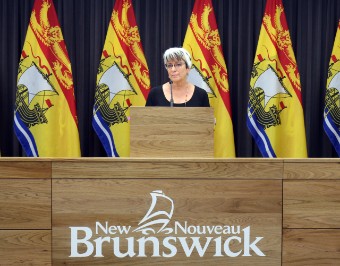