Budget invests in seniors, youth and the economy

FREDERICTON (GNB) – The 2018-19 provincial budget tabled in the legislature today focuses on investments in seniors, youth employment and economic competitiveness.

“This is a budget that works for all New Brunswickers,” said Finance Minister Cathy Rogers. “Your government puts communities and families first, protecting the vulnerable and investing in our young people and our seniors. We have taken a balanced approach that allows us to achieve our fiscal objectives while also investing strategically.”

The budget includes an additional $73 million in new targeted investments to support economic competitiveness, youth employment and seniors, which will delay a return to a balanced budget by one year, to 2021-22.

“Today’s budget recognizes the challenges that lie ahead. By listening to New Brunswickers and investing in priority areas, we can meet these challenges head-on,” said Rogers. “As a result of the priority investments in seniors, youth and economic competitiveness, the plan to restore balance to the province’s finances will be delayed by one year.”

Economic growth is anticipated to surpass one per cent in 2018, for the fourth consecutive year. The projected deficit for fiscal 2018-19 is $189 million.

“The decisions your government have made in this budget reflect the economic growth, education and family plans that New Brunswickers have helped develop,” said Rogers. “The investments we are making will enhance the competitiveness of our economy, support our youth and seniors and lead to improved economic and social outcomes into the future.”

The 2018-19 provincial budget does not contain new taxes or fee increases.

As announced in November, effective April 1, the small business corporate income tax rate will be reduced to 2.5 per cent from 4.5 per cent in 2014-15.

o   increasing the number of innovators in the province;

o   continuing to invest in the Smart Province initiatives.

The 2018-19 budget speech and accompanying documents are available online. 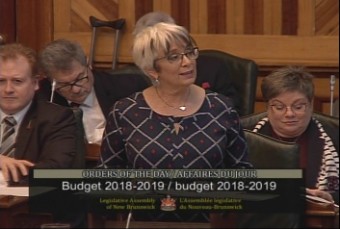