Office of the Premier
Finance
Health

FREDERICTON (GNB) – An agreement was signed today that will increase federal health funding for New Brunswickers. New Brunswick is the first province to reach such an arrangement following this week’s negotiations with the federal government.

“We are listening to New Brunswickers who want us to have a strong partnership with the Trudeau government and who want us to invest in better senior care and health care,” said Premier Brian Gallant. “Today’s agreement ensures that we can receive funding for home care and mental health this spring that might otherwise have been delayed or lost. This agreement with the Trudeau government means concrete results for New Brunswickers through increased health-care investments.”

“Today, Premier Gallant made a decision that is very good news for the people of New Brunswick,” said federal Health Minister Jane Philpott. “The Government of Canada will make significant investments to improve the quality of health care for Canadian families, including increased access to home care and mental-health care. I want to thank Premier Gallant and our provincial counterparts in New Brunswick for their vision and leadership.”

Under the 10-year agreement, New Brunswick will receive the following benefits:

Provinces were concerned that the federal offer earlier this week of 3.5 per cent growth was inferior to the current legislated option of a three per cent floor or national GDP growth rate, whichever is higher. This secures the more favourable formula for New Brunswick.

New home care and mental health funds were off of the table due to the lack of a national agreement; the provincial government negotiated to restore this important targeted funding in this agreement.

Provinces were concerned about a five-year deal on mental health and home care because more long-term certainty is needed for budget planning; this agreement secures 10 years of funding. 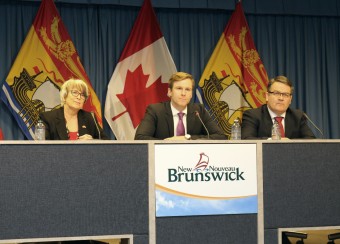