EDMUNDSTON (GNB) – The New Brunswick and Quebec governments have renewed their agreement for co-operation and exchange in relation to the Canadian Francophonie. As part of this, they have committed to a joint investment of nearly $1.2 million over the next three years.

“The renewal of this agreement demonstrates the solid and enduring bond of friendship between our two provinces and to New Brunswick’s commitment to the vitality of our Acadian and francophone communities,” said Economic Development Minister Francine Landry, who is also the minister responsible for La Francophonie. “Quebec has long been a special economic and cultural partner. Your government is proud to sign this agreement, which will make it possible to carry out major joint initiatives, as well as contribute to the development of French culture and language throughout the country.”

The agreement focuses on projects aimed at strengthening ties among the Acadian and francophone communities of New Brunswick and Quebec in the following areas: economic development; rural, local and regional development; francophone immigration; education and early childhood; tourism; arts, culture and communications; employment and income security; youth; health and social services; and the French language.

“This co-operation agreement between Quebec and New Brunswick in relation to La Francophonie is one of the most important of its kind in Canada,” said Jean-Marc Fournier, Quebec’s minister responsible for Canadian relations and the Canadian Francophonie. “By joining forces, our two governments are strengthening that co-operation even more today. Together, we are making French resonate, we are affirming it, and we are giving it the place it deserves, because it is an asset for all Canadians.”

According to Landry, the joint investments of nearly $1.2 million over the next three years show the importance of co-operation between the two governments in relation to La Francophonie and of collaboration between the two provinces. The funding will be used to support Rendez-vous Acadie-Québec, a networking event that brings together entrepreneurs from New Brunswick and Quebec for the purpose of increasing trade and promoting university co-operation to maintain a French-language research network among the Université de Moncton and various Quebec universities.

In addition, the two ministers have pledged to meet at least once every two years to assess the Canadian Francophonie and the projects supported through the agreement. 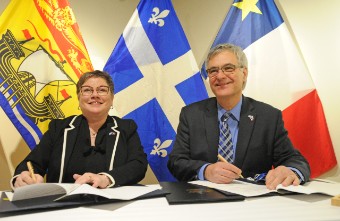 Gabrielle Fallu, press secretary, Office of the Minister responsible for Canadian Relations and the Canadian Francophonie, 418-646-5050.