FREDERICTON (GNB) – New Brunswickers are being asked to share their views on the issue of poverty and economic and social inclusion.

A public engagement process taking place during February, March and April will lead to the renewal of Overcoming Poverty Together: The New Brunswick Economic and Social Inclusion Plan.

“The Economic and Social Inclusion Corporation has developed a comprehensive public engagement process promoting the participation of all New Brunswickers by conducting an online survey, participating in community and sectorial dialogues, and submitting briefs,” said Stéphane Leclair, the corporation’s executive director. “The online survey and the community dialogues are considered an important part of the renewal of the plan.”

The province’s 12 community inclusion networks will organize community discussions on ways to reduce poverty. People are encouraged to organize other dialogues in their own communities.

A discussion paper, Looking Back to Move Forward, provides participants with an overview of New Brunswick’s achievements in poverty reduction and economic and social inclusion over the past decade.

“The main advantage of Overcoming Poverty Together is that it unites, around a common goal, the four main groups of stakeholders: those who live or have lived in poverty, non-profit organizations, business people and government, including the official Opposition,” said Social Development Minister Dorothy Shephard, who is also co-chair of the corporation’s board of directors. “It remains a unique model of collaboration in economic and social inclusion in Canada and elsewhere.”

The Economic and Social Inclusion Act states that the corporation must renew the plan every five years through a public engagement process. The current plan expires at the end of 2019. Once this first stage of the process is completed, the ideas collected will be analyzed by subject matter experts. Taking into consideration those opinions, the corporation will then create a list of priority actions that will guide the third version of the plan.

The survey, discussion paper and details on public dialogues are available online. 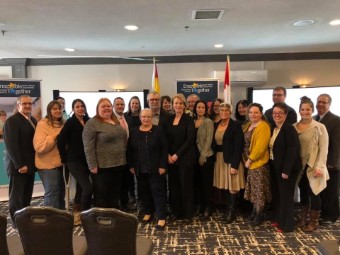