Government to fight for exclusion from border duties on softwood lumber

FREDERICTON (GNB) – The provincial government is asserting its support for the New Brunswick softwood lumber industry the week before a preliminary determination is expected from the United States Department of Commerce on their countervailing duty investigations of imports of certain softwood lumber products from Canada. Preliminary antidumping duty determinations are due later in June.

“Our government was extremely disappointed when the United States Department of Commerce initiated an investigation into imports of softwood lumber from New Brunswick,” said Treasury Board President Roger Melanson, who is also the minister responsible for Trade Policy. “We are focused, and working hard alongside the federal government to secure exclusions from any trade remedies that may be initiated by the American government, whether imposed through managed trade or through litigation.”

The forestry industry contributes more than $1.45 billion to the provincial economy each year and employs more than 22,000 New Brunswickers.

“The softwood lumber industry is a valued and important part of the New Brunswick economy, and our government will be working to support those communities and families impacted by the decision coming from the United States Department of Commerce,” said Energy and Resource Development Minister Rick Doucet. “Our government will continue to engage the local forestry sector and pursue every avenue we can in support of the forestry sector, as well as work with the federal government through the Federal-Provincial Task Force on Softwood Lumber, to resolve this important issue.”

The provincial government has also set up a task force to address the issue. The task force, representing 11 government departments, aims to determine and mitigate the impact the preliminary decision by the United States, expected next week, could have on New Brunswick communities and families.

Premier Brian Gallant and other government representatives have been lobbying the federal and American governments in support of New Brunswick’s exclusion. Melanson was in Boston this week, discussing the matter with officials of the Massachusetts state government, and did the same during an advocacy mission to Augusta, Maine, earlier this month.

For more than 30 years, New Brunswick has been excluded from every softwood lumber agreement and all trade litigation due to Atlantic Canada’s unique market conditions. Melanson said those exclusions are still justified since New Brunswick’s private timber market remains robust and the province continues to set Crown stumpage prices based on fair market value. 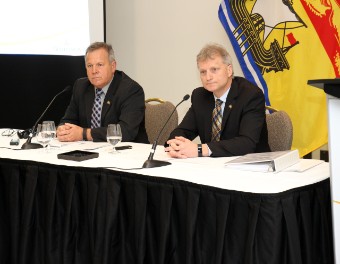