Where do New Brunswick’s GHG emissions come from?

Figure 1 shows the distribution of GHG emissions among the various sectors in New Brunswick, with industry, transportation and electricity generation identified as the largest contributors to New Brunswick’s GHG emissions. 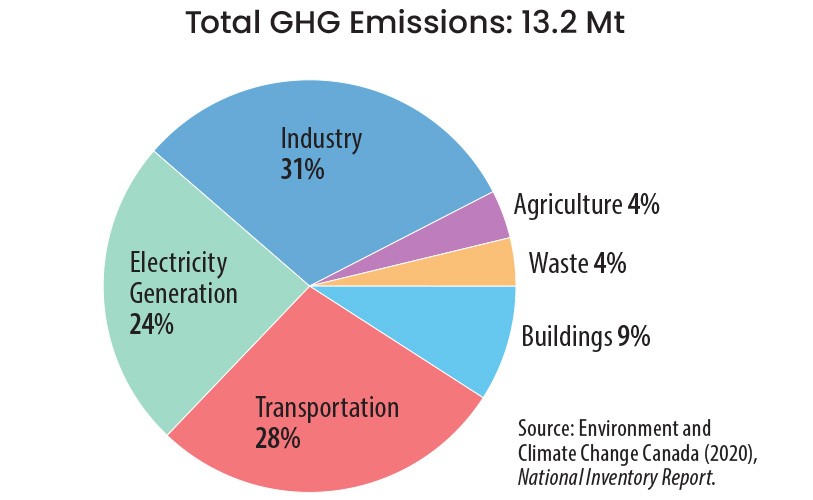 The Province is already experiencing the impacts of climate change.  New Brunswick’s mean annual temperature has already increased by 1.1°C in the last 30 years. Rising sea levels have also increased the risk of flooding and coastal erosion. Historically, the province has experienced extreme weather events that have caused catastrophic damages. Since December 2016, a number of these weather events have occurred including a snow and freezing rain storm moved across the province causing a long duration of power outages and destroying much of the electrical distribution infrastructure in the Acadian Peninsula.  In 2018 and 2019, the province experienced back-to-back spring flooding along the St. John River causing record setting flooding and the highest damage costs of any flood event. Additionally, in late summer of 2019, post-tropical storm Dorian brought high winds and rain to the region that resulted in extensive property, infrastructure, and shoreline damage.

How will climate change affect New Brunswick in the future?

Warmer temperature
In New Brunswick, projections indicate an anticipated increase of approximately 5°C across the province, with some areas becoming warmer than others. Projections also indicate a substantial increase in very hot days (days above 30°C) and longer growing seasons. Potential effects of warmer temperatures include an increase in risk to water quality, increase in pests/invasive species, more freeze-thaw events or potential for health impacts such as heat stress.

Wetter
Annual precipitation is projected to increase with a shift toward more rain days and less snowfall days.  Potential effects of changing precipitation include increased run-off, flooding and erosion and increased risk of damage and failure or key infrastructures.

Rising Sea Levels
Sea level rises primarily as a result of the melting of glaciers and ice caps and the rate at which they are melting has increased due to global warming. In New Brunswick, sea level is predicted to rise by approximately 1m by 2100. Sea level rise combined with high tidal cycle and storm surge can lead to increased flood elevations and increased risk of coastal flooding and coastal erosion risks, potential loss of natural habitat and damage to infrastructure.

How is New Brunswick responding to climate change?

New Brunswick is committed to being part of the solution to this global challenge. In 2016, the province released Transitioning to a Low-Carbon Economy New Brunswick’s Climate Change Action Plan.  The Action plan calls for greater emphasis on renewable energy, a broad-based and coordinated approach to energy efficiency in homes and businesses, and a phase-out of coal-fired electricity.  It also focuses on initiatives related to education, awareness, capacity-building and adaptation planning.  In January 2021, the province released a report outlining progress on actions to date New Brunswick’s Climate Change Action Plan Progress Report 2020.

Under the Paris Agreement on Climate Change, Canada, along with 193 other countries, agreed to limit the global temperature increase to well below 2°C above pre-industrial levels and pursuing efforts to limit the temperature increase to 1.5°C above pre-industrial levels. For its part, Canada committed to reducing its GHG emissions by at least 30% below 2005 levels by 2030 and achieving net-zero emissions by 2050.

New Brunswick has already made significant progress in lowering emissions, having reduced our emissions by 34% since 2005.  To date, GHG reductions in New Brunswick have been achieved through significant actions related to closures of coal and oil-fired plants; the incorporation of wind energy; restructuring in the forestry sector; and investments in energy efficiency, fuel switching and increased penetration of natural gas into the markets. 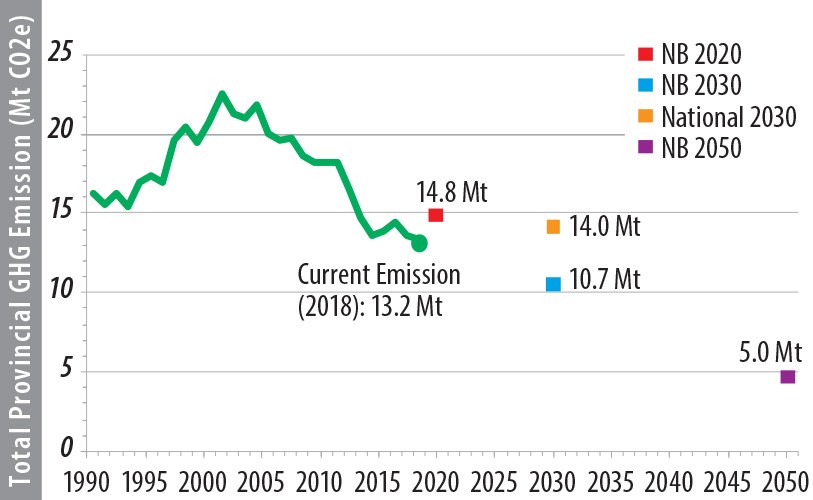 Preparing for the Changing Climate

Climate change adaptation is about making well informed forward-looking decisions that take into consideration future climate conditions. New Brunswick’s Climate Change Action Plan contains a climate change adaptation strategy supported by actions to build resilience into our communities, businesses, infrastructures and natural resources. Acting early and adapting to our changing climate is far more effective and cost-effective than dealing with climate impacts after they have occurred.  For example, since 2017, the provincial government has supported community adaptation planning throughout the province, with all New Brunswick cities and highest risk coastal municipalities having completed vulnerability assessments and adaptation plans.  To learn more about ways the province is preparing for the impacts of climate change, visit the Climate Change Action Plan Progress Report.