Transportation and Infrastructure
Office of the Premier

Final phase of the Petitcodiac River restoration to proceed

MONCTON (GNB) – A new permanent bridge over the Petitcodiac River, connecting the Town of Riverview with the City of Moncton, will mean a safer, more reliable crossing for commuters and tourists and a restored tidal flow that will enhance eco-tourism and economic growth for the region.

The provincial and federal governments are committing $61.6 million to continue the third phase of the river restoration.

“Decades ago, some mistakes were made regarding the Petitcodiac bridge. The message today, as New Brunswickers we get to make things right for the environment for future generations,” said Premier Brian Gallant. “This investment will create jobs in the short term and help boost tourism in New Brunswick. We have been talking about the restoration of the Petitcodiac River for as long as I can remember, by working together with the Trudeau government we are getting it done.”

Work involves replacing the aging river gate structure with a 240-metre steel girder bridge and realigning the river channel. These improvements will expand on work done in the first and second phases of the project to improve tidal flow and permanently extend the river estuary upstream.

Achieving full tidal flow is expected to enhance eco-tourism, along with commercial and recreational fishing, by restoring the fish passage and fully re-establishing the Petitcodiac River tidal bore.

The provincial government is contributing $32.9 million to this project. The federal government will provide the remaining $28.7 million.

“The Government of Canada is working in close partnership with New Brunswick to ensure we make smart infrastructure investments that help grow the middle class and promote economic development. More than a new crossing for commuters and pedestrians, this bridge marks the final stage of re-establishing the natural beauty of the Petitcodiac River tidal bore, the abundance of our fish population, and the fullness of this vibrant waterway that is so integral to the health and prosperity of our region,”,” said federal Fisheries, Oceans and Canadian Coast Guard Minister Dominic LeBlanc.

Work to restore the river began in 2008.

Phase 1 involved planning, remediation work and site preparation to prevent erosion. This included shoreline and erosion protection along the river channel, waterline relocation, drainage improvements, and dyke and aboiteau construction. The causeway gates were opened in the spring of 2010.

Phase 2 involved allowing the Petitcodiac to flow freely as a tidal river. With the gates open, the seasonal response was monitored as the river, fish population and the surrounding habitat adjusted to the changes. 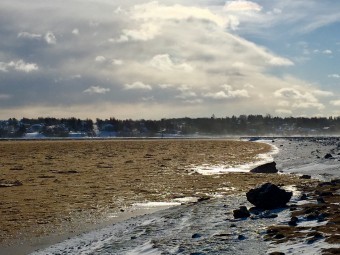 Brook Simpson, press secretary, Office of the Minister of Infrastructure and Communities, 613-219-0149, brook.simpson@canada.ca.