The Flowering of Maritime Culture

Extracts from Maliseet &Mi’kmaq:
First Nations of the Maritimes by Robert Leavitt 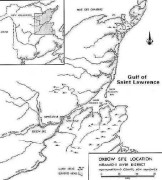 The period from 3,500 to 2,000 years ago was one of great change throughout eastern North America. New trading patterns developed and new ideas were exchanged.

In the Maritime region, prior to this time, people had been exchanging ideas and goods with neighbours to the north; other influences had moved up the Atlantic seaboard from the south. Now, however, people in the Maritime region began to exchange goods and ideas with people living to the west.

By about 2,400 years ago, Adena people, who lived in the Ohio River Valley and built the huge burial mounds there, had begun to spread their influence over a wide area of eastern North America. They exported their religious beliefs and practices, along with trade goods, as far away as the Maritime region at about this time, on the North West Miramichi, people built the Augustine Burial Mound.

Joseph Augustine, who is a member of the Red Bank band of Mi'kmaqs, knew from oral tradition of a place on the reserve which had been used for ceremonial dancing in the past. After reading an article about burial mounds, he suspected that many artifacts might be buried at this spot.

His own explorations and an archaeological excavation proved him right. The site consists of a low mound, built up from river silt on the gravel underneath, one metre high and eleven metres in diameter.

The mound covers at least nine separate burial pits and dates to 2,400 years ago. (All the remains found at the site were reburied in a traditional Mi'kmaq funeral ceremony.)

The range of artifacts recovered from the mound is extraordinary for the Maritime region. Provincial archaeologist Christopher Turnbull, who conducted the excavation, found items that normally do not survive in the acid soil of the region- bits of basketry, braided textiles with complicated weaves and patterns, wooden-handled tools, animal hides and moosehair work. These materials had been preserved by copper salts (from copper beads and other artifacts in the site), which had penetrated them.

In addition, the mound was well drained and the artifacts had not been lying continuously in wet soil. Turnbull also found a variety of other Middlesex artifacts, some fashioned of local materials, others from imported stone. There were smoking-pipes made of Ohio fireclay (a kind of stone) and highly polished gorgets.

There is little doubt that the people on the Miramichi- and in many other parts of North America- maintained close connections with people in the Ohio River Valley from about 2,500 to 2,000 years ago.

The last 2,800 years of Maritime history are pretty well known from the archaeological record.

At the Oxbow site [in New Brunswick], at the Red Bank reserve on the Little South West Miramichi River, archaeologist Patricia Allen has excavated a series of layers containing ancient campsites buried in the silt and sand deposited by floods. She has found evidence of an almost unbroken sequence of occupation stretching back 2,800 years. Pottery found at Oxbow shows that ideas from the southern New England region and the Great Lakes had made their way to the Miramichi by 2,200 years ago.

For the past 400 years at least, the Mi'kmaq and Maliseet peoples have lived in separate areas and spoken different languages. During the period of European settlement and colonization, they had different subsistence patterns.

It is difficult, however, to identify particular archaeological sites with one group or the other, except to say that sites are located in the areas that were occupied by the Mi'kmaqs or Maliseets at the time of contact.