Aboriginal Affairs
Justice and Office of the Attorney General

FREDERICTON (GNB) – The provincial government is working with First Nation Elders and leaders, as well as the judiciary, to ensure the process of having Eagle Feathers available for affirmations, before testifying in court, is done with the appropriate cultural protocols. This sets a precedent in New Brunswick to formally acknowledge Indigenous cultures within the court system.

A special ceremony took place at Government House in Fredericton on Tuesday to recognize the importance of honouring Indigenous traditions and cultures, including acknowledging the right to swear an oath on a sacred Eagle Feather, if a person so chooses.

“Introducing the Eagle Feather into the New Brunswick court system is a significant step toward reconciliation,” said Aboriginal Affairs Minister Jake Stewart. “We have been working with our First Nation leaders and Elders to get their input and to make sure this is done properly and respectfully.”

The event was held to recognize the intentions of Indigenous communities and the provincial government to collaborate on implementing the Truth and Reconciliation Commission’s Calls to Action related to establishing culturally relevant services in the justice system.

Although there is still work to do before the protocols for the use of the Eagle Feather in courtrooms are finalized, the ceremony recognizing this commitment was scheduled to coincide with the Assembly of First Nations’ annual general assembly, which is taking place in Fredericton July 22-25.

“With this symbolic gesture, we look forward to strengthening our relationship with the Government of New Brunswick to bring forward real change to the provincial legal system,” said Assembly of First Nations Regional Chief Roger Augustine. “We need to move toward a justice system that is restorative with the ultimate goal of a First Nations system." 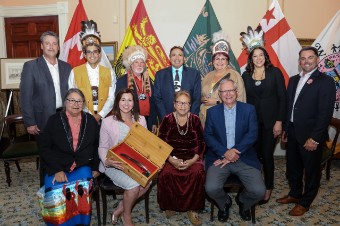