Plant parasitic nematodes are small worm-like animals, usually about 1 mm in length, which live in soil and feed on plant roots, though some species attack above-ground parts. Most are of little economic importance, but a few species are serious pests and in some instances the entire crop may be lost. Since nematodes usually attack underground plant parts, there are no reliable foliar symptoms to signify that nematodes may be the major cause of poor growth and reduced tuber yields in potatoes. In roots, injury by nematodes may be detected by the presence of lesions, cysts or galls. After a few weeks, however, roots are attacked by other pathogens such as bacteria and fungi, and the original damage by nematodes may not be obvious. Consequently, nematode damage has often been attributed to other factors.

There are no estimates in Canada of yield losses in potatoes due to nematodes. However, in the United States, it is estimated that 10% of the potato crop is lost annually because of nematodes, and it is reasonable to assume that this percentage is also applicable to Canada and the Atlantic region.

Root lesion nematodes invade and migrate in potato roots, though tubers are sometimes invaded when nematode populations are very high. Adult females lay eggs in roots or soil. Second stage juveniles hatch from the eggs, invade roots, and develop through the third and fourth stages to adults. Second, third, and fourth stage juveniles, as well as adult males and females are all capable of invading and migrating through roots. A life cycle takes 20 to 60 days to complete, and depends mostly on the condition of the host and on soil temperature. Maximum damage occurs in sandy soils, since these nematodes prefer this type of soil, and also because sandy soils are suited for potato culture. Above-ground symptoms caused by high populations of root lesion nematodes are sometimes falsely attributed to lack of water or nutrients.

Fumigant nematicides are an expedient way to control nematodes. The major disadvantage of chemical control is the cost of fumigants and the need for specialized equipment. Planting is delayed by three or four weeks if fumigants are applied in the spring. In addition, there is the possibility that residues may be left in tubers or may contaminate groundwater. Therefore, any grower who suspects that nematodes are a problem, and is considering a chemical treatment, should contact the Provincial Pest Control Specialist.

These parasites (Meloidogyne spp.) cause damage in temperate regions, though they tend to be more destructive in warmer climates. Root-knot nematodes in cooler climates are believed to overwinter primarily in the egg stage. Second stage juveniles hatch from eggs, invade host roots, and develop into sedentary third and fourth stage juveniles, and finally to mobile worm-shaped males or to sedentary pear-shaped females that can produce 300 to 400 eggs. Above-ground symptoms of root-knot nematode damage in potatoes may be mistaken for nutrient deficiency or water stress. Roots usually develop galls or knots, and tubers can be invaded when root-knot nematode populations are high. 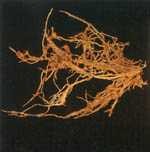 Galls on potato roots
caused by the Northern
root-knot nematode

Control
Root-knot nematodes are controlled by fumigants. Crop rotations are also quite effective since M. hapla does not invade annual ryegrass, timothy and cereals. Substitution of these crops in place of forage legumes removes host plants from the crop sequence for at least one growing season.

The clover cyst nematode Heterodera trifolii is a parasite of various forage legumes in the Atlantic region. Populations are usually small and damage is insignificant. The distinct characteristic of this nematode type is the development of the mature female into an egg-filled cyst that can survive in soil for several years. The clover cyst nematode does not parasitize potatoes, but the cysts may be present in soil adhering to tubers. Several countries that import seed potatoes from Canada restrict the entry of the clover cyst nematode.

Control
Removal of forage legumes from the rotation eliminates the clover cyst nematode population in a few years. In fields where legumes are grown in the rotation, harvesting when the soil is dry, and brushing potatoes to remove excess soil, reduces the chances of cysts adhering to tubers.

Globodera rostochiensis ("the golden nematode") and G. pallida are serious pathogens of potatoes in various regions of the world. These two species have been detected in a relatively small geographical area of Newfoundland and are not found in other Atlantic Provinces. As is the case with all cyst-type nematodes, the mature swollen females die and their bodies become tough protective cysts containing several hundred eggs that can survive in soil for many years.

Control
Potato cyst nematodes have a limited host range (potato, tomato, eggplant, wild Solanum spp.). Therefore, the most practical approach is to select a crop rotation that includes non-hosts such as cereals and forages, and potato cultivars that are resistant to potato cyst nematodes. These cultivars include AC Domino, Atlantic, Belchip, Campbell 13, Cupids, Donna and Hudson. Fumigation is also effective. As an added measure, the spread of potato cyst nematodes from infested to uninfested areas in Newfoundland, and to other parts of the continent, is prevented by quarantine regulations that limit or restrict movement of soil, machinery and vehicles containing soil, and various plant materials.