In November 2021, the government of New Brunswick published their plan for local governance reform in a white paper entitled "Working together for vibrant and sustainable communities". 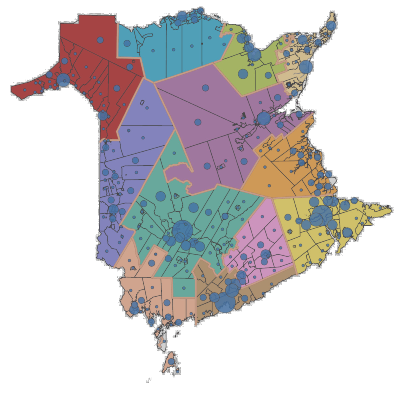 In New Brunswick, there currently are:

Together, that adds up to 340 entities.

In the new structure there will be 89 entities:

What is a local government?

A local government is an incorporated entity that provides services and makes decisions on local matters for a defined geographic community. Each local government has a council comprised of a mayor and councillors who are elected through a general municipal election every four years.

What is a local service district?

A local service district (LSD) is a structure that allows for the administration and delivery of local services such as streetlights, recreation, garbage collection, and fire protection, etc. to areas of the province that are not incorporated (i.e., do not have a mayor and councillors). These services are coordinated by the provincial government through the Department of Environment and Local Government.

What is a rural district?

With reform, we will introduce a new type of entity: a rural district.

All local governments and rural districts will be represented on the regional service commission board of directors.

What are the current challenges with local governance?

30% of New Brunswickers don’t have an elected local government that can make decisions on their behalf. Cooperation between communities to share costs and deliver services is very difficult in many regions. Many communities have limited financial resources and struggle to provide good quality local services at an affordable cost.

We have a system of local governance that is not as efficient or effective as it could be. It is not organized in a way that can meet the many current and future challenges facing our communities and regions.

Despite changes to the local governance system, including the major overhaul of the 1960s, various organizations and individuals (and many studies) have continued to call for more substantial reform.

What we heard (PDF)

The last comprehensive overhaul of New Brunswick’s local governance system occurred in 1966-67. The reforms, introduced as part of the Equal Opportunity Program, were largely based on the findings and recommendations of the 1963 Royal Commission on Finance and Municipal Taxation in New Brunswick, often referred to as the “Byrne Report”. The most significant changes to the local governance system at the time included the following:

A revamped property tax system was introduced to support the new provincial and local service responsibilities and the new structure. This included the introduction of the provincial property tax ($1.50 per $100 of assessment); the centralization of the assessment, billing and collection functions.

County municipalities were eliminated and replaced by LSDs. Many small communities were incorporated as villages and existing towns and cities remained in place.

The unconditional grant system for local governments and LSDs was introduced to help ensure that residents could receive a comparable level of services at reasonable property tax rates.

The Municipalities Act was enacted that would set the administrative and governance framework for municipalities and local service districts.

All content © Government of New Brunswick. All rights reserved.